Where Are They Now? – Ron Redford 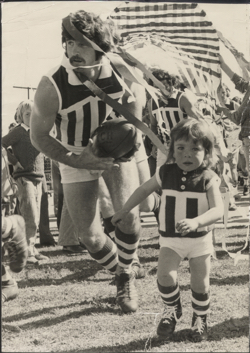 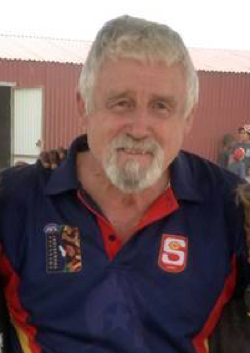 Ron came to Port Pirie to Coach Ports in 1973 after playing all his junior football through to League at the Glenelg Football Club. From Glenelg Ron didn’t go far up the highway to Captain Coach the Camden Football Club A-Grade. The Glenelg Past Players Association benefitted greatly from his involvement on their committee. He is still a member of that group.

Ron was a plumber at the time of his move to Pirie and in his two-year stint (1973-74) he almost succeeded in coaching us to a premiership in his first year, failing by only 9 points in the Grand Final. BUT, the good news was that in those times a lot of money was bet on football games, particularly finals. In that game against West Augusta, West foolishly gave 5 goals in for quite a bit of cash, and although we didn’t win the Premiership, we got the money.

Ron brought a couple of famous sayings with him:

After the first two years Ron, along with his good mate Rodney Skuse (who was coaching Proprietary) moved to Broken Hill to coach opposing sides there.

On his return to Pirie Ron coached Solomontown for a time before returning to coach at Ports again for three years from 1989-91. Ron also spent one year as President of our Club and had a big involvement with our Incentive Club when that was up and running. Ron’s expertise was invaluable with social events at the Club, in particular the New Faces nights and was noted for his ability as a ‘wrestler’ – with his mate Kevin Connor.

Ron is currently employed in Ceduna by the SANFL as the Far West Football Program Co-ordinator. Ron is in his tenth year as President of the Far West Football League. His son Nathan who played for our Club still lives in Pirie. Ron finds a bed there when he’s passing through or visiting. His daughter Kerryn lives in Adelaide. Ron’s former wife Sue who still lives in Pirie, was a great support to Ron and our Club in early days, especially through catering and the Ladies’ Committee.

These days Ron is a star on Facebook – have you seen/heard him sing Mexican cowboy songs?

Port Football and Community Sporting Club is proudly supported by these sponsors: